The final day of the Ontario trout season was a mix of frustration and excitement for this angler.  I typically spend at least part of the day ushering out the season but this year I was afforded the majority of the day and was happy that I did.  The morning was dedicated to streamers but as Murphy would have it, I should have brought my light rod, as once the morning light hit the pool, trico’s began dropping in numbers and the fish started working.  I fished the shoulder water from a high bank with a large, Kelly Galloup streamer in the dark which I eventually hung in a tree.  My expectations were high as we had taken a lovely fish just two days before on the same fly in the same run but this morning it was not meant to be.  I hung the fly on about my tenth cast and once again, Murphy’s law came into play and placed it just out of reach.  I did my best but I don’t climb tree’s anymore, so it remained there.

By the time I gave up on my tree streamer, the light was on the pool.  I resumed from where I had left off with a shiny new pattern and had made another half dozen casts or so when I heard the first fish hit the surface.  I don’t get overly excited by one odd fish taking a fly so I continued on until a second fish, about 30 feet downstream from the last showed.  Now my interest was piqued as when I looked up into the space above the river, it was thick with trico spinners.  I had dry fly leaders in my vest but didn’t feel very good about casting them on my 10 foot #7 though it wasn’t the worst case so I took off my sink tip and installed a 13 foot, 6x leader.  As I was making the change, at least two more large trout began working in a nice rhythm about 100 yards downstream so now after tying on a #20 trico, I stood back and watched… waited… nothing more.  Fifteen minutes went by and as I had limited time to be on the water, the 6x went back into the package and I re-installed my sink tip.  I walked up the bank and stepped into the river and began working out some line.  The nice thing about streamer fishing is it gives one the opportunity to keep an eye on things and as I scanned the slack water downstream of my position, a massive trout nosed up and took what could only have been a cluster of trico’s.  I continued casting but kept a watch and sure enough, he came up again and then a third time.  I knew what would happen here but I had to do it so for the second time in an hour, my sink tip came off and the 6x went back on with the tiny spinner.  I crept out of the river and gingerly walked down the bank to address the fish.  He showed twice more as I approached and I thought for just a second that he might hang out.  I slipped back into the stream as quietly and gently as I could and got into place.  I fed some line off the reel, judging the distance between me and where he had last showed and then waited… and waited some more.  Once again, nothing.

This isn’t the first time that this has happened to me but regardless and as frustrating as it is, one can’t help but admire the guile of a large trout.  I didn’t move but rather chose to go back to the steamer and after covering the water diligently, I returned to the top of the run.  My enthusiasm was still high and I fully expected to take a good fish but it was not to be.  Four bass later, including one of about two pounds, I headed back to the shop.  It’s hard to be disappointed by a trout river when you know the fish are there.  You just have to accept the fact that you were bested and that’s that.

Scott came in and relieved me in the afternoon and I headed back out with renewed zeal.  My plan was to finish off nymphing a favorite run and sip on a cold beer.  I was hoping to run into a couple of friends so I bought a six pack but for whatever reason, the other two had moved on so I had the run to myself.  I started with a San Juan worm as the water was thoroughly stained.  I have a hard time going small, (which is what I would do during normal conditions in this sector) as I feel that the fish have a hard time finding your fly.  The worm is a big profile and my thought was, the trout should be hungry after coming off of several weeks of warm temperatures so why not feed them.  I worked the run as well as I could giving special attention to a couple of known lies when my indicator dipped underneath the surface.  I set the hook and was rewarded with a heavy fish that sped for the safety of the heavy main current.  “Finally!”  I said to no one but as the fish came in close, I knew something was up.  He went like hell for about 15 seconds but then gave up and when he came to the surface, he revealed himself as a walleye.  I made my mind up then and there to take the fish home as I haven’t eaten a walleye in several years but as I slid my hand under his belly to lift him, the barbless hook came free and he slapped my hand as he slipped away. Oh well.

I changed flies several times from large scuds and isopods, to caddis pupa but could not find a trout.  “What the hell!”  I thought, “Let’s go small.”  I chose a little red and black chironomid that had given me solid success earlier in the season and began working the water directly in front of me.  I asked my friend, Nick Groves several weeks earlier how he felt about going so small in off coloured water and his answer was, ‘My sense says not to but my research says otherwise.’  Nick is as good an angler as I know and he is tireless in his reading and putting stuff to the test so my confidence was ‘Ok’ but not by any means high.  That was until I finally hooked a trout.  “I’ll be damned!”  I thought as the fish did his best.  There were two more anglers downstream and they both stopped and watched as I worked the big trout close and a few seconds later, I was admiring him in my net.  Fall browns, especially males are beautiful and I felt pretty good about myself as I watched him disappear into the murky water.  I shook the water out of my net and hung it on a convenient broken branch to dry on a big willow behind me .  I’d done this dozens of time before and never thought anything of it as the branch had a perfect little ‘up turn’ to it that held it well in place and was easy to reach if needed again. I  didn’t think anything of it that is until I hooked my second fish.  The first was about 18 inches and I knew immediately that this one was considerably larger.  He stayed down in the heavy current, as big fish do and worked hard but eventually I eased him into range.  I backed up to where my net was on that branch but my heart fell when I turned to grab it and it wasn’t there.

I’ve had that net for about 15 years and was rather fond of it.  It was a just a good ‘all around’ tool,  big enough for our Great Lakes steelhead and the biggest Grand River fish but not so large that it was heavy and cumbersome on my back.  It was gusty this afternoon and I figured the wind blowing downstream gradually worked it off of that decidedly not so perfect branch and into the water where it drifted away.  I glanced downstream, hoping it got held up in the riffle but I didn’t see it. 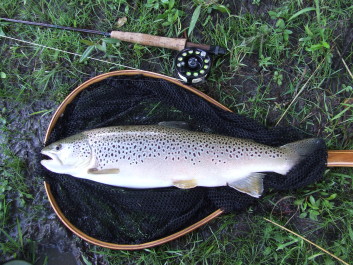 I also had a big trout to deal with so went back to landing what was likely my big fish of the year…netless.  As it turned out, he came along nicely and I was able to get my hand under him and pick the little chironomid out of his beak.  I held him there for a few seconds contemplating how best to photograph him but decided against it.  I don’t like taking pictures of fish when I’m by myself as there is really no good way to do it so when he was ready, I let him glide off my hand back into the river.  I figured he was between 21 and 23 inches but will never know for certain.  He was heavier than a big hen that I took earlier in the season on a crane fly but I’m not sure he was as long.  Regardless, it was a great way to end the season despite losing my net.  I walked down the bank a ways but the net was not there so I sat back on a little grassy mound, lit a cigar and opened a beer. It was about five and I told Becky that I would be in by six so I had some time to reflect.

What a season we had!  Closing day is always bittersweet but steelhead occupied most of my thoughts so I just sat there, listening to the river and the birds and the wind.  The beer and cigar went well together and I couldn’t think of anything I’d rather be doing.  I’d miss that net though.  I emptied the beer, stood up and began to ford the river to the path back up to the car.  It caught my eye about halfway across.  There, at the mouth of the path and dead centre which made it hard to miss, was my landing net.  One of the two guys who had fished below me, obviously found it and rather than spoil a perfectly good day, they did the right thing.  It’s often the little things in life that bring us back and that big trout now seemed to pale in comparison to the kindness of one angler.  Thank you, whoever you were and I hope to run into you next year.