When I was younger on the east coast, sun down on closing day was a tough one.  I remember one particular day on the Stewiacke River at the Glen where I was all alone and working my way to the tail.  I had landed a lovely little grilse early in the day so it was all rather complete but I couldn’t quite shake knowing that this was it for a long winter.  The Stewiacke was one of the only rivers near my home that was open until the end of October so we were able to fish into the early fall.  On occasion, we would take our shotguns and hunt grouse in the morning or maybe ducks and then fish into the evening.  I have a picture somewhere of a rare ‘surf and turf’ scenario with myself and my friend with two grilse, three grouse and a black duck on the ground next to our fly rods and shot guns.  That didn’t happen often but it provided some nice history to my early days back home.

However though, like all good things that come to an end and despite looking forward to hunting, the thought of not being able to cast a fly rod again until April caused me to tear up just a bit. As the sun fell, giving way to that dusty twilight I reached the tail of the run.  I reeled up, bit my fly off and then reached into the cold water for a mouth full as I do every time I leave a salmon river.  It just one of those silly little rituals that I started and can’t stop.  The water seldom tastes very good but it just makes me feel a little more a part of the whole thing.  Must be the Cree in me.  As I walked up the bank back to the path that would take me to my car, I glanced back at river to the spot that earlier in the day, that little grilse took my butterfly and I concluded that it was in fact complete. 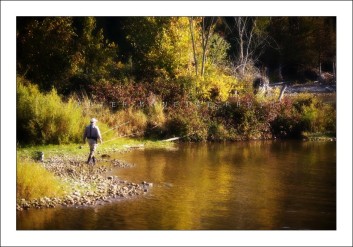 That was Nova Scotia in the 80’s and although it’s a bit different now, we didn’t have any winter fishing to scratch that intolerable itch.  Fall salmon fishing transitioned to six weeks of pheasant hunting (my second great passion) and that turned into the mind and foot numbing cold of rabbit hunting taking us to mid February when that was it for sportsmen.  Nothing to do for six weeks but tie flies, sharpen knives, clean guns and drive my mother half insane.  Here in Ontario though we have it pretty good.  The inland trout season closes on September 30th and although we will lament the end of  the fair weather and casting 3 weights, we still have three months of good fishing and in a good year, we can extend that indefinitely or at least until the poor weather prohibits it. I hold very closely my home in the maritimes but I don’t think I could leave Ontario now.  The fishing is just too good.

That said, I will fish closing day of trout and hopefully with my father for at least the morning and with a little luck, we will find a good fish, eat lunch at a pub and talk about a time when we hung out regularly.  My dad is getting on and the thought of spending the morning trout fishing with him makes the end of the season just a bit more tolerable.

Here’s to closing day and many, many more.