Should the upper Grand River be open to a year-round fishery?  It’s a question we anglers have been asking ourselves for years.  There are two camps here: the “Protect spawning fish” group and the “There’s not enough natural reproduction to worry about it” group.  I will always endorse the protection of spawning fish and if we had evidence to support that argument in the case of the Grand River tailwater, that position should remain.  However, I’ve been fishing the tail water for 20 years and can tell you with some level of confidence that the number of natural fish that I have landed can be counted on maybe two hands.  Does some natural reproduction occur?  Of course it does.  Statistically, there is bound to be with the numbers of fish going through the motions.  Inevitably there will be some viable eggs.   That figure though, is so small that it probably shouldn’t come into play as an argument for a year-round fishery.

There is however, another side to this that is directly linked to the act of spawning trout and that could have a negative impact on the trophy trout in the Grand River tailwater.  Several years ago I was involved in an independent survey on a Facebook page that asked anglers to comment on whether they agree or disagree that the season should be extended or opened year round.  It elicited a number of comments both for and against but one in particular caught my eye.  “We need to protect the brown trout that are on the spawning beds mid-Oct. to late Nov.  Some steelhead bait fishermen already illegally target these fish for their roe, but with a closed season it is easier to detect poaching.”

When I read this response I was a bit surprised and wanted to comment right away but then I slowed down and gave it another long look.  The gentleman who presented this opinion is someone that I, and most of us involved in the local fly fishing community have the utmost respect for and it was for that that reason that I paused.  I asked myself, “If this guy is against it, he has a reason…” That was enough for me to question my own thinking on the subject.  Although I am not certain it was intentional, his words were very careful. “We need to protect the brown trout that are on spawning beds.”  Not, “We need to protect the brown trout that are spawning.”  This is what gave me pause and, in my opinion this is one of the strongest arguments that we need to think about while discussing the possibility of an extended season.

Viable eggs or not, large spawners will pair up and go through the motions and it’s at this time that they are most vulnerable.  Their paternal instincts will keep them hovering around their beds until such time that they feel it safe to vacate.  It’s also at this time that the valuable roe is at its ripest and for the unscrupulous, most easily obtained.  Brown trout roe is widely considered one of the best of baits for steelheaders drifting spawn and for some, it matters not how they come by it.  Anyone that’s fished the tributaries of Lake Ontario has seen it; Beautiful, large broad stock brown trout with their bellies slit open and unceremoniously discarded on the bank.  This act is committed by the same idiots that stand at the base of a dam and cull their catch on a stringer and then brag about what wonderfully talented fisherman they are on Monday morning at the water cooler.  It happens too frequently and until the province bans the use of roe it will continue to happen.

On rivers like the Grand or the upper Credit during late October and early November, large spawners are more vulnerable than other systems due to the lack of angling traffic and would-be bad guys are left on their own to do what they please.  No one polices it because it’s closed and there are bigger fish to fry elsewhere.  This goes back to the original argument of; if we open the season, it makes it more difficult to detect poaching.  It could be argued that this thinking is counterintuitive and that just the opposite result would occur if the river was opened to angling during the spawning period.  The presence of fly fisherman occupying the river in proximity of spawning fish could be a strong deterrence to those set on taking fish for their spawn.  The idea that it becomes easier to detect poaching is debatable but one thing is certain, special regulation prohibits the killing of fish on the catch and release water and further special regulations could be put in place to include the catch and retain sectors after September 30th that would further prohibit needless killing of large trout.  This fact is irrefutable; bad guys will find a way to be bad no matter what measures are taken.  An extended season however would add the presence of anglers that truly care and have an interest in the fishery and its future.  (We also carry cameras and mobile phones.)  That presence would be a deterrence at least during the daylight hours, effectively reducing the number of hours when these poachers could ply their trade. There is enough of a precedent set by other regions in NA, where angling for trout year round is legal, to at least visit this idea of extending the Grand River tailwater. 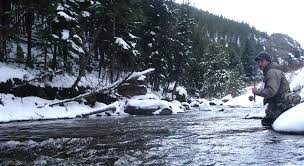 For examples, parts of the Madison River are open all year and systems like the Delaware have implemented into their 12 month season special catch and release regulations between Oct 16 and the first Saturday preceding  April 11 on both the Big D and the West Branch.  Colorado’s  S. Platt system and that region has over 30 tailwaters that are open to angling 12 months a year with most of them having  stocking programs along with a natural component and with a mixture of species.  According to our research, these rivers see very little negative effect on released fish, even during the coldest days of winter. (The Frying Pan River has not been stocked since 1998 and thrives 12 months a year).  This has been a debate for many years but as someone who has close tie’s to the local angling community, I can tell you that the question is raised often enough that perhaps it should be re-visited, as it seems to be on the minds of a great deal of anglers.

We welcome your comments.