It has been said of trout reels that they are merely a devise to store fly lines.  If that were the case we could all get by nicely with a stripping basket on our hips instead of one of the many models of light reels available in our Shop.  Although trout reels are seldom pushed to the limits they most definitely serve a greater good than storing line.  Does that mean that you have to spend as much or rely as heavily on it as your big game rigs?  No, but it also should not mean that they be purchased with a “Bic lighter” mentality either.  So what qualities should a trout reel possess?

Like anything in fly fishing, it is subjective but as a starting point, here is our check list…  First, the drag should be smooth enough to protect the lightest tippet while fighting fish.  The machining and components should have tight tolerances and feel solid adding to the longevity.  It also needs to balance your rod because probably more than in big game rigs, finesse casting will be compromised by an unbalanced system.  Aesthetics are the most subjective as we all have different tastes but don’t settle for something less than what you expect.  We have known anglers that put looks first and those that put it at the bottom but don’t be fooled by a pretty reel.  Some of the less pleasing to look at reels have stood the test of time and still perform as well today as they did 75 years ago. 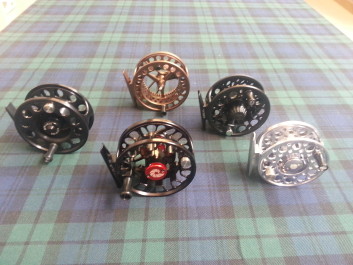 When deciding on a trout reel, get with a pro and discuss your needs.  If you are looking for something that will suit you fine on your favorite brook trout stream than less is probably more.  However, if you fish the Saugeen River,  The Grand River tail water or even the Credit River you run the risk of hooking trophy trout.  Here, you likely need a reel that will handle hard fighting fish and fast runs Spend what you can afford but try not to compromise.  You get what you pay for.