The Importance of Distance

Distance casting is a funny thing.  We strive for it but seldom get to use it.  If you visit the casting lanes at any of your spring sportsman’s shows or fly fishing shows, you will inevitably find someone there drilling out 70 foot casts and if that caster possesses some skill, it can be an impressive demonstration for sure.  However, from day one in most of our fly fishing careers, providing our teacher/mentor is a practical, no nonsense individual, you will be told time and time again that the fish are more often than not, right in front of you.  When I was young and learning to cast, like most kids, I concentrated far more on distance than I needed to.  Chick’s dig the long ball, right?  Well that may be true, but the fish we angle couldn’t give a rat’s hiney about style points and the reality in fly fishing is that 80% of the fish that we catch will be well within the 40 foot range.

Does this mean though that we should dismiss distance casting to concentrate on other aspects of the game in favor of what is the norm, or is there a place in practical fly fishing for distance casting?  The reality of it all is that, yes, the majority of the fish we hook in fresh water are within 4o feet and that in most cases, beyond that range, your presentation is compromised exponentially, but when the need arises, isn’t it better to have it and not need it than to need it and not have it?

Several years ago while fishing in Patagonia, we found a behemoth brook trout feeding on callibaetis in a massive back water on the Corkovado River.  The problem was though, that by the time we spotted the fish and dropped the anchor, we were well beyond a good angle and lifting the anchor in the big river would have pushed us out of her range.  We decided, however to give it a go and as I was a right hander, casting to the right hand bank from the stern, our guide gave me the shot.  Several things were happening here as I assessed the situation. First, it was about 65 feet to a patterning trout that would require me to lay the fly in its path at a precise second.  Next, the current that we were anchored in was much faster than that of where the fish was working.  In fact, she had taken station in somewhat of a back eddy, precipitating the need for not just the distance but a massive in air, upstream mend to dump enough line into the faster current to allow my to fly hold in place long enough for the trout to see it before the quicker current directly in front of us pulled the fly away from her.  And finally, the wind, ever present in that part of the world was sure to play havoc with my presentation.  I got myself squared away with a  good amount of line at my feet and about 20 feet, not including the 14 foot leader out of the rod tip.  I needed the wind to provide a window of opportunity, so I waited for likely over a minute, never taking my eyes off the trout before I began to work my cast out.  As the wind died at the top end of her pattern, before she made the turn to work her way back to my target area, I began false casting and slipping line on both the forward and back cast.  Carrying about 45 or 50 feet, I established the time and let loose, shooting the remaining line and throwing in the reach mend while leaving the rod tip elevated.  The cast and reach worked out well and the fly landed about four feet in front of the fish or, as it turned out, about one foot too far as the current did exactly what I anticipated and pulled the fly out of the zone after about three seconds.  I recomposed myself and the next cast landed almost perfectly and stayed in place long enough for the big trout to find it, close the distance, nose up and take it.  It remains one of my fondest memories and no matter how often I relive it, it manages to make me smile. 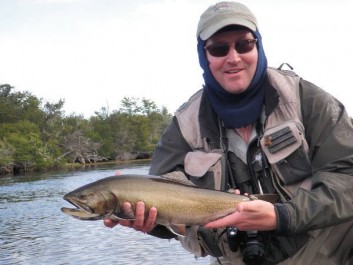 The Roman Philosopher, Seneca, with his quote, “Luck is when preparation meets opportunity” reminds us that we can manufacture our own luck with the proper skill set and that when one does find oneself presented with an opportunity, without that skill, well, that trout may as well be at 165 feet.

Practicing all aspects of fly casting will increase your success, and as anyone at the top of his or her game will tell you, you can’t practice too much.  I like to urge people to practice both on dry land and in the river as the water and its currents will create more practical situations that you will find yourself having to deal with while fishing.  Further to that, always remove your fly and in doing so, you remove the ability to hook fish as during practice, one should be focused solely on whatever presentation you are trying to sort out.  Discipline yourself to commit to 20 minute of practice on every trip to the water and spend some time on a field hitting targets beyond your comfort range.  The combination of the two will make you a better caster and a more rounded fly angler.