It takes me about an hour and 15 minutes to work the lower end of the Junk Yard run.   During December with the water temperature at only 4 or 5◦c there is little use in starting in the fast water above as the fish simply won’t be there.  It’s too cold and fast and the steelhead at this point will be looking for over wintering water and the lower end is perfect for that.  Also in water this cold, an hour and 15 minutes is about all I can take before I have to haul out and walk the bank back to the top where I’ve assembled a quick start fire that will warm me before I change flies and begin working the run again.

It’s mild for December but not so much that it’s comfortable and more like tolerable.  It’s also overcast and gloomy with a thick canopy that provides no chance for the sun to work through and provide some comfort.  There is no wind at all giving an eerie stillness to everything except the river and with the trees void of leaves and the prevailing greyness of the land the day appears depressing.  But it’s far from that and in fact, it is setting up to be a perfect day.  I’m on the third day of stable weather and given the current conditions, this is steelhead weather and I’m standing in steelhead country.

The Junk Yard is actually two separate runs.  The top piece is faster and flows over some lovely structure at that dreamy walking pace current.  It’s a long riffle, full of character and is my favorite run on the river but today I’m concentrating on the secondary piece downstream of the Junk Yard proper.  This section flows out of the main run and slams into a high bank which deepens to about five feet and slows considerably.  This is where I will find steelhead today.

At the top of run I begin my regiment of starting short, just in case a fish or two has crept into the shallows overnight and then I lengthen my subsequent casts by about 18 or 20 inches.  Once I reach the 90 foot mark I continue to cover the water with the monotonous and robotic waltz that steelhead and salmon fisherman have come to recognise simply as the most efficient way to cover water.   Cast, mend, step, cast, mend, step.  The morning is shaping up to be a memorable one if for no other reasons than that the weather is perfect  and it will likely be my last outing of the year,  giving me time to reflect on just about everything.  So I take it all in.

At about the ¼ mark of the run I’m scanning downstream towards the tail out looking for anything and as if on cue, the water bulges and twists exactly where my eyes stop as a good fish, for his own reason, comes to the surface and reveals his lie.

“That’s encouraging.” I say to nobody.

I make a mental note with a shore line reference to where he is and assume that he’s not moving.  It’s too cold for that and it’s not the right time of day so he will see my fly.  I’m about 10 or 12 casts away and although I feel the urge to work quicker I resist it.  The regiment has worked well in the past and there is no sense in being hasty.  Who knows, there could be 3 more fish between me and him that chose not to give up their position.

As I reach him I’m naturally filled with anticipation and work the area just a bit more diligently.  I try slowing the fly down, speeding it up, casting short and long as if I had actually moved the fish and missed him but he doesn’t budge.  I carry on and continue the pace.  Cast, mend, step.

The take of a winter steelhead is as subtle as the sunrise and often comes when you least expect it.  As I close the distance to the tail, I’m anticipating touching some rocks but this is different.  I describe it as a heavy but gentle pause in the swing.  Unlike a rock, the steelhead is moving when he takes the fly but no matter how slowly he takes it, it’s unmistakable.  I lift the rod firmly until it bends and I’m rewarded by the hard head movement of a good fish.  He thrashes near the surface and backs away as prize fighter might do when being hit with a series of combinations.  Still fighting but in peril.  He continues near the surface for about 20 feet before he digs in.  This comes as a relief as it always worries me when early in the scrap a fish thrashes chaotically at the surface.  It tells me he’s not hooked well and he knows it.

At these temperatures they don’t go as hard or as long as autumn fish but he managed two long runs and one thwarted cold water attempt at a jump which reveals clearly the red flanks of a large buck fish.  He eventually comes to the gravelly shallows and I’m able to grab the leader as I put the large handle of my two hander under my arm.  Hand over hand until he is right in front of me and one clockwise turn of the leader brings his tail to my left hand.  Steelhead are wonderful creatures and no matter how many times I do this, I can’t help but think of how gentleness in this situation prevails.  Don’t squeeze him, support him. 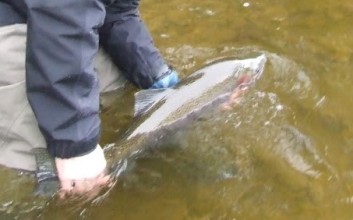 He doesn’t flinch as I control his powerful tail and instead just settles in as if to acknowledge the victory.  I reach forward as the long rod dips into the river and easily remove the hook from his scissor.  A quick check and yes he’s wild!  I admire him for a few seconds, smile and he slips away off of the gravel and back into the run.

The water is colder than the air so my hands warm quickly.  I haul out and walk back upstream to where the fire and my gear are.  A beer and a bacon sandwich will help me decide if I should go through the Junk Yard a second time or make the bitter sweet drive home.  I know there are fish there but I’m pretty content right now.   Maybe one more quick pass after a break just to put a period at the end of the season.