Like any fish that we chase, there are several primary factors that affect behavior. Where migratory fish are concerned, it’s safe to say that at the top of the list is locating them. As suggested, migratory fish migrate which means they move. They can be here today but gone tomorrow and as academic as it sounds, if they aren’t there, you aren’t catching any. So what can we do to increase our chances of finding fish?
Timing and then keeping your finger on the pulse of their patterns is paramount. Steelhead go with the flow both on the upstream and on the downstream migration and when they are moving, they are difficult to catch. Typically what we look for is a good hit of rain to the point that it swells the rivers and gets the fish moving but then begins to recede. There are a number of graphs available on the internet that can help your decision making but knowing your individual river and her tendencies will get you farther as not every river reacts the same to precipitation and run off.
As the river recedes and begins to stabilize, steelhead will stop moving and begin to look for holding water. That is typically in the form of runs and pools with enough structure to provide some cushions and enough depth to provide a sense of safety. But here is the fly in ointment. The major difference between spring steelhead fishing and fall fishing is that during the spring period, we are more often than not fishing to both fresh fish and to those fish that have already spawned and are dropping out. We are also fishing in steadily improving conditions and we should react to that. When we get the chance to fish for steelhead in late February or March, it is often in cold and generally poor conditions. Aquatic nymphs, San Juan worms and yarn eggs fished slowly under an indicator will typically prevail but as the conditions improve and more and more fish shed, it pays to go back to more aggressive presentations such as large streamers swung through deep pools. Why? Because at this point, the shedding fish are becoming far more “trouty” and are feeding heavily. This is important to recognize as the fishing actually becomes fast and furious once the river temperatures reach about 10 degrees C. 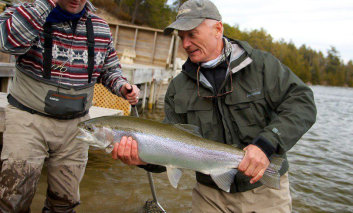 This large hen kelt appears to be fresh but in fact she is a well healed post spawn fish. (Note the indentation in her belly ahead of the vent.)

Post spawn fish on their way out will become ravenous after spawning has worn them out and long winter of fasting. Sculpins and other bait fish patterns, Intruders, Prom dresses and the like fished behind a long floating leader is often all you need. Getting deep and slow is not essential as these fish will chase a fly and hit it with reckless abandon. They will gain considerable weight at this time and begin to heal up after enduring the rigors of spawning.
Spring steelhead, in particular Kelts, are often over looked by the purists as they don’t provide the same level of sport as the early run fish. But those that do take advantage of the spring angling opportunities will tell you that it can be the best of the season if conditions are right.
More on spring steelhead opportunities next time.
Join us on March 14th for our in store presentation on ‘Predicting Great Lakes Steelhead’.