Most of us that hunt for steelhead through their entire season (Sept to late May) will tell you that there is an opportunity to strip streamers with some success.  Post spawn fish, upon vacating redds will quickly return to eating voraciously after feeding very little for several months and can therefore, become extremely aggressive.  Traditional trout streamers fished to structure such as boulders or wood will often produce fish and blind casting into deep runs and pools with a strip is a good bet because, as we talked about, the fish are both hungry and aggressive.  We need to keep in mind that steelhead are, in fact, trout and for much of their life, behave like trout.

That all goes out the window though, in the fall when they begin their migration upstream to spawn.  Feeding slows to a point that we are no longer in a “match the hatch” situation and must apply more emphasis on simply locating fish.  As fly fishers, we typically utilize one of two presentations: high stick nymphing and the more traditional, down and across swing.   The use of shooting heads and two handed rods have gained enormous popularity over the past 10 years and there is little question about their effectiveness but is there another side to these set ups that gets missed?

This season has seen some of the lowest water that we have experienced in years and the pools and runs that we fish are vastly different than what we are accustomed to this time of year.  Lower water means more static water which precipitates the need for lighter sink tips and smaller flies as a general rule, but it also means making changes to our presentations.  While fishing with heads gives us a great advantage, it also comes with a bit of baggage.  Anyone that uses shooting head systems will tell you that the downside is that after each swing,  one has to strip in the running line to a point just ahead of the shooting head in order to make the next cast.  This means wet hands and a good deal of clumsy line to manage.  However, the upside greatly outweighs the downside in that we are able to carry a varying range of sink tips in order to fine tune our rig, find the zone that the fish are at, and for that reason, Skagit and Scandinavian heads have become the rule.

This stripping process of getting the head back to the rod tip is generally done with a fair bit of vigor to eliminate downtime and get the fly back into the river expeditiously.  Under normal conditions, this makes perfect sense, as often the water directly downstream of us, where the fly will be swimming through during the strip, will be shallow and unproductive so getting the rig set up for the next cast takes precedent.  Having said that, and I get asked the question a lot, do steelhead ever take on the strip?  Of course, it is bound to happen.  Statistically, if one is working the run with a good bit of diligence, it will happen on occasion but I wouldn’t generally call it a percentage play.  However, what happens when normally swollen runs, which we typically are faced with in the fall are uncharacteristically low?

What happens is, we are often faced with having a percentage of that run with static water between us and the main current.  In other words, and due to the slack water between us and the fly, your “swing time” can be cut short precipitating the need for an early retrieval. Otherwise, you run the risk of your fly sinking too rapidly and getting hung up.  I have to admit that this came to me completely by accident but it has become somewhat of a revelation and subsequently the rule in low water conditions.  I was fishing a piece of water that normally provides a good swing and allows the fly to come to rest in a typical “hang down” position. 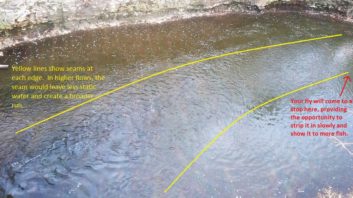 Note that during extreme low water conditions, the shoulder water is very slack but still maintains a good depth. Steelhead will often orient to that seam between the main current and the static water. A slow retrieve through this water will find more fish.   (Click on image for larger view.)

However, due to the low water conditions and having about 20 feet of dead water between myself and the head, the swing was inhibited by the static water, causing the fly to come to rest on about a 45 degree angle rather than directly below me.  I hung several flies on rocks despite using only an intermediate Rio Versi Leader so rather than run the risk of losing more gear, I began a slow, finger crawl retrieve towards the end of the swing or just before it stopped.  This brought the fly back towards me and actually ended up covering a large portion of the seam created by the main current and the static portion.  At first, I did this mainly as a means to keep my fly off of the bottom but figured, what the heck, I may as well fish it out. 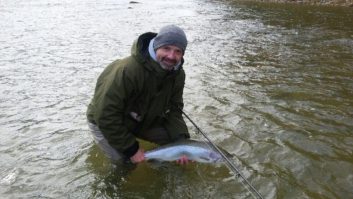 Well over half of the fish that we have taken this season have come on a slow retrieve!

Well, you can guess what comes next.  I started hooking fish.  In fact, over the course of 3 or 4 outings and about a dozen fish hooked, over 75% came on the retrieved fly!

Now, there was a combination of elements that came into play that made this work and I’m not by any means suggesting that it should become the exception to the rule, but my thinking was this: If the fly is working through 3 to 5 feet of water, along a seam, why not fish it out?  Particularly when the water temperatures remain in the optimal zone (50 to 65 degree C.) and the fish are happy and aggressive.

In low flow conditions, steelhead are still looking for holding water but they may not find it in runs that you would work under normal water levels. I’ve targeted several of my favorite haunts this season only to find the conditions not suitable for holding.  We now need to work to find the deeper runs and pools that will still maintain that optimal 3 to 5 feet with a walking pace flow and enough structure to provide the fish some current break and concealment.  Often though, these runs will break down as I previously talked about, with a percentage on either side of the river having fairly slack shoulder water.  When you come across this, impart a slow retrieve at the end of each cast and hang on.  A lot happens when a six pound steelhead hammers a moving fly and you have 25 or 30 feet of thin running line in your hand but the reward is more than worth it.

In any angling that we do, we need to be flexible and adapt so when a piece of water doesn’t breakdown like you expect it to, experiment with your presentation until you find the correct formula.  It goes without saying that the more your fly is in the water, the greater chance you have of connecting.