The most under fished stage of the mayfly is the spinner fall. It is also the most misunderstood stage, yet if you talk to anyone who regularly looks for it, they’ll tell you it can provide the most exiting fishing of the day.  Unfortunately for anyone who has to travel to fish, it can also be the most unreliable fishing due largely in part to the fact that the event can occur very quickly and timing is absolutely critical.

What is a “spinner fall?”  The spinner fall is the final stage of the mayfly’s life cycle. Sometime between twelve and forty eight hours after hatching (this varies by sub-species) the male and female return to the river from their cover. When the spinner fall happens also varies but the most consistent activity occurs in the evenings between dusk and dark or early in the morning.  It’s important to note however that there are several factors that will ultimately affect the timing.  For example, a dramatic drop in air temperature in the evening can and probably will delay the fall.  This delay can last as long thirty-six hours depending on weather and may cause the fly’s to deposit their eggs at odd times like the middle of the day.  Ultimately though, the females drop their eggs and die, giving the trout an easy feeding session once a day.

Let’s look at the spinner fall in more detail and break down what happens during this period.  In my experience the most predictable falls occur during the evenings and are usually preceded with a long period of inactivity. (Like most events in nature, there are few rules and some mayflies regularly deposit at other times such as early morning or just before sunrise.  The only way to get a feel for timing is to put your hours in waiting and develop patterns based on sub-species and environmental conditions.) Trout that have fed heavily during the day on emerging insects are resting during the mid to late day period.  High sun during this time may also cause them to be cautious and seek cover, making this time the least productive period of day.  However, as the sun drops below the trees and the shadows deepen, the trout will move from their resting places and return to primary feeding lies.  It is at this time when we start to see early signs of spinner activity with the odd bug showing in the air.  As the evening progresses, more and more spinners appear high above the water until it peeks with the sky filled with thousands of bugs.

Preliminary activity will have the spinners high in the air; often hovering around the tree tops that earlier provided cover.  As their drive to procreate increases, they drop lower to the river and begin mating.  It is common to witness this act as it is often performed over the river and near the run or pool that they hatched just hours before.  Mating mayflies are easy to spot as they pair off and appear as one, dancing and diving above the water.  Mating is surprisingly quick and will be followed by a mass migration up river towards a shallow riffle that will provide the eggs refuge for the next generation.  Some of the most remarkable natural events that I have ever witnessed on the water have been spinner falls and no matter how often I see it, nothing really prepares me for the anticipation I feel when those first few bugs begin to hover above the river.  At this point, it is worth taking note of what is going on around you.  Has the wind died off or is it increasing?  What is the air temperature compared to the water?  Is the air temperature dropping?  All of these factors can influence what will happen in the next 30 minutes.

Evening hatches often coincide with spinner falls and it is very common to have fish working emergers or duns prior to the fall.  However, more often than not once the spinners are on the water, the working fish will switch over to helpless spinners.  This makes sense for the same reasons as we discussed in Part II, trout are lazy or at least opportunistic and there is no easier meal than a dead or dying one.  Here and like the emerger, the rise will be slow and deliberate with absolutely no sense of urgency.  Unlike the emerger though, you should see the snout and will often hear the “thwup” of the cup like upper mouth coming back down on the water.  This is a sure sign that the fish are on spinners.

If you are not looking for spinners you may miss them as they will usually deposit their eggs in the shallow riffles upstream of pools or runs.  Also, the spinner on the water leaves virtually no signature so they may drift into the pool without you ever seeing them.  If there are emerging bugs mixed in with the spinners, don’t be fooled.  It is likely that the spinners will be what the trout are eating and not emergers or duns. 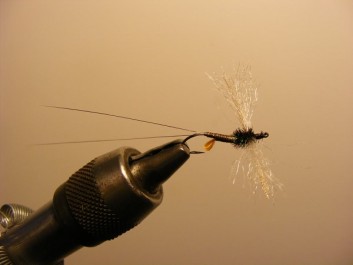 The RH Spinner is a trophy taker!

Keep an eye on the closest riffle and look for the spinners hovering above it.  You will often see the egg laden females as they will be carrying the bright egg sacks.  The closer they get to the water, the more likely they will drop.  Be prepared with some flies dressed and ready to go as your light at this point will be waning by the minute.  A good, soft light head lamp is always an asset here.