What to use and when.

For the purpose of explaining this, we’ll look at a typical hatch on an average day.  Assuming that we know what insect is most likely to emerge and that we are prepared in terms of patterns, what do we use and when?  During a hatch period the emergence can be fairly predictable.  Providing no weather anomalies, the bug that emerged at 3:00pm yesterday will probably emerge at the same time today.

Trout react to each stage of the emergence as it suits them.  They will move about within their territory to intercept food and the stages of the emergence dictate where they will be found.  At the start of the emergence, trout will move from primary lies where they have been eating nymphs and relocate to an area were the nymphs are more vulnerable.  If a riffle is producing a lot of emerging insects, than it makes sense, given the time it takes for the shuck to be completely shed that the bugs are helpless for a long period of time. The trout will move to these locations to feed on the bugs carrying the burden of the trailing shuck.  Not every piece of water is an ideal “riffle, run, pool” situation but it won’t take long to see where the fish  find where these emergers are at their most vulnerable.  The rises will be subtle at first.  Slow and deliberate with almost no sense of urgency.  Often, even with duns on the water, the trout will be keyed in on the helpless emergers as they offer the easiest meal.  What you need to look for here is a rise without a mouth.  The easiest way to describe this without a visual reference is to call it a “bump” in the water.  If the emerging insect has not yet been trapped in surface film and is riding just under the surface, you will seldom see the trout’s head.  What you will see is a slight bulge of water followed by dorsal and maybe a tail.  To present a dry fly to this fish would more than likely result in a refusal or out right disinterest. The fish at this point are looking for animated, yet helpless bugs.  To a gluttonous trout, this would be like you or I preparing lasagna from scratch or throwing last night’s left over’s in the microwave.  It’s right there in front of you and it’s easy.

Your best bet here is to try a heavily dressed nymph just under the surface with a dead drift.  A great way to get this done is to apply floatant to your tippet about five inches up from the fly.  About 20 inches of floatant along the tippet will do. This keeps the fly under the surface film but not so deep to miss your target trout. Another presentation that I use more often than any is to use an emerger pattern that would traditionally be fished on the surface.  Floating nymphs, Klinkhammers or Usualls to name a few will work but it’s critical that the fly be presented under the surface.  By placing yourself across but just up stream of your target, you are in a position to make your cast above and beyond the target fish.  Casting above and beyond it allows you to then draw the fly back by moving your rod in an up stream “reach” type mend.  The “reach” mend is a control tool that allows you to draw the fly back and deposit it exactly in the fishes feeding lane but equally important, it will pull the fly under.  If performed correctly, your casting arm will be extended to a point off your upstream shoulder and your handle should be somewhere at your head level.  Once your fly has found the fishes feeding lane, your line and leader will be close to a right angle from your rod tip.  Now, it is simply a matter of sweeping your casting arm down stream at the same or slightly faster rate of speed than that of the current to introduce enough slack to allow your fly to drift drag free over your target.

During the peek of the hatch, duns will often be mixed in with emergers that have not yet fully shed their shuck.  You have no doubt seen or heard these referred to as “trailing shuck emergers”.  Most often tied as a floating nymph or sparse hackle with a trailing shuck of antron or some other translucent material, the fly is made to ride low in the surface film but not under the surface.  Once again, this stage demonstrates the adherent laziness of trout, as the fish will often refuse meaty duns in order to take these easier targets.  The rise form here is similar to the first in that it is still slow and deliberate but you should start to see the trout’s head.  This rise starts with a bulge on the surface as the fish’s head breaches it and is followed by a slow head to tail roll. 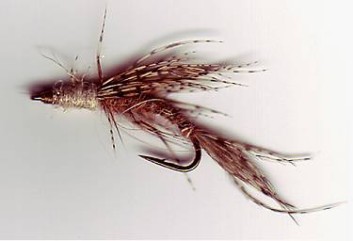 March Brown Emerger. Note the “Bugginess” giving this pattern a lot of movement or animation.

The important thing to remember here is that there is still no sense of urgency in the fish’s rhythm.  The bugs are still easy pickings and the fish know this.  This may seem rather academic in terms of spotting the rise but during a heavy hatch where duns and emergers are mixed in together, you can waste a lot of time casting duns and blaming your casting when in fact, it is emergers the fish are on.  Take the time to watch a few rises to determine whether or not duns are disappearing but should you determine that they are drifting along unmolested than try a trailing shuck.

The easiest rise to recognize is that of the trout eating duns.  I’ll reiterate how important it is to stand back and observe the trout’s behavior.  Once the fish have turned off of the emergers and are on duns, the task becomes somewhat easier but still has its challenges.  During moderate hatch activity, you can usually get by with an artificial of the same size.  However, during heavy activity, more finesse is required.  At the beginning of the hatch, providing the trout have keyed in on duns; again, go with the closest thing you have.  A Catskill type dry, CDC dun or variants are a good bet. When the fish have limited opportunities the chance of them picking yours off is pretty good, but as the hatch intensifies, your chances diminish exponentially.  During a blanket hatch, when there are bugs every six inches, finding your fly among them is like looking for one particular needle in a stack of needles.

I’ll usually take a break at this point and just sit back and watch. (ya right!)  One of the most difficult things to do during extraordinarily heavy hatch activity is to stay focused on one fish. If you have fish rising all over the pool, the chances of one being more stupid than the rest is slim.  Discipline yourself to target one good fish and work it until it’s spooked or fooled.  But let’s go back to the “needle in a stack of needles”.  At this point you need a fly that will stand out both to you and the trout.  One size larger or smaller may work, but I prefer to be a little more creative.  During heavy hatches, many duns are crippled or stillborn.  The trout will eat them among the healthy duns when they appear in their feeding lane.  Carry with you a good assortment of these imitations as they may make the difference in blanket hatch situations.  Heavy hatches can be the cause of frustration but remember this; every hatch starts, peeks and ends.  Often the most consistent fishing will be at the start, when the duns are few and at the end for the same reason.  We don’t get to experience blanket hatches everyday or every year for that matter.  Don’t blow the opportunity to learn just for a couple of trout.  Take the time to watch the fish and how they react to each stage of the emergence.  Its kind of fun and you’ll get the chance to see what many miss due to their impatience.