Depending on who you talk to, somewhere between 70% and 90% of a trout’s diet is subsurface but learning to fish that part of the column is, to many new fly fishers, daunting.  It’s easy to determine what is going on when you can see the fish, but when they are not on or near the surface, it seemingly becomes a roll of the dice.  It doesn’t have to be though, and when you get it dialed in, your success will increase like you never expected.

There is a large contingent of trout anglers out there that turn their noses up at nymphing.  Whether or not it is simply perceived as “cheating” or that it appears to involve less skill is anyone’s guess but the fact is, nymphing is as technical as it gets. If you follow a few simple rules though, you will turn the corner quickly on what many consider to be the most productive presentation out there.

1/ Weight and indicator formula.  The rule of thumb is to place your indicator somewhere between 1 and 2 times the depth of the water that you are targeting.  This depends greatly on the current speed but to put it into perspective, the swifter the water, the greater distance between your indicator and weight.  Slower runs, conversely, will require you to be closer to the actual depth of the water.  You will know you are in the zone when you find that you are setting the hook on every 4 to 6 casts, be it by a fish eating your fly or touching bottom.  It’s important to note here that frequent changes in the depth and or weight may be required if you are working a river with varying depths so don’t be afraid to make adjustments.

2/ Water temperature is critical.  It goes without saying that water temperatures rise as we get deeper into the season but reacting to those changes are critical to success.  Opening week on most of our system will typically find the water temperatures in the low to mid 40’s (tail waters, like the upper Grand River can be even colder.) and although trout are a cold water species, this is still well below their comfort zone.  Trout feed most actively between 50 and 65 degrees Fahrenheit so outside of these ranges, their metabolism and need to consume food, slows precipitating the need to get deep fast and stay deep.  Trout in these conditions will not move far for an offering so it becomes a game of inches.

As the temperature rise closer to the happy zone however, the need to be on the bottom decreases as the trout will and often do move and forage for food. During these periods, weight is of less importance as the fish will often be active from the bottom to the surface.

3/ Cover water.  Showing your fly to more fish sounds academic but far too many anglers get hung up on one seam or one high percentage target and make cast after cast to that particular piece of water and ignore the fringe water.  A couple of hints to get you covering water more effectively are:

-Start fishing close.  If you are reasonably sure that you are the first person to fish the piece of water that you are on, start fishing where you will eventually be standing to cover the main piece of the run and work you way out gradually.  Trout will often move into the shoulder water during the night and remain there until the sun hits them or they are spooked back into the comfort of the pool. 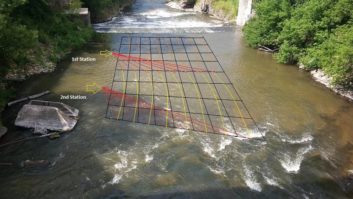 -Extend the length of your line by about a foot after every two or three casts until you have reached the far side of the run or have hit your maximum, manageable length of line.  Spend a bit more time in the high percentage bits but cover the water with a purpose.

-Move and rest.  When I can, I establish stations and work each one methodically, moving upstream.  (See image left) If you apply the last point, (Extend the length of your line after every two or three casts.) and you break it down, you will cover the water with far greater detail.

Once I have covered all of the stations in that run, I’ll change my fly and start over at the beginning and re-work the rested water as before.

Not everything is cut and dry as is the case with most fishing, however, with some practice, nymphing will become a staple weapon in your arsenal and is far more enjoyable than many give it credit.  If you talk to anyone that has taken the leap and become a successful nymph fisherman, be it with or without an indicator, they will tell you more often than not that it is the single most productive method of catching trout throughout the season.