Fly tiers are an interesting sub-culture in the world of angling.  On one hand, you have a group of extraordinarily creative dudes that have the ability to look at a material, define its qualities and put it on a hook with a very specific purpose.  This group tends to be the same guys that you see bending over the river with an aquarium net analyzing samples and taking notes. 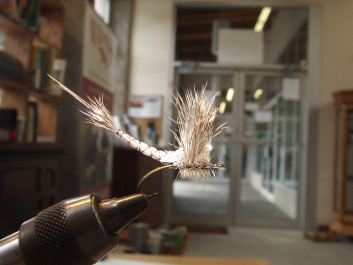 Rob’s Extended body Drake is a combination of a classic extended body and a compara dun but he used the two for a specific reason, that being that the size of the fly required the assistance of the hackle to float it properly.

These notes are then applied to the material and how it will make a fly look appealing to a trout.  Take for example, Gary Lafountaine. He was the designer of the famous sparkle pupa, and used what he then called “sparkle yarn” which we now know as Z-lon.  But he didn’t simply pull this out of thin air and instead chose that material for a very specific purpose.  It had the qualities that he required to emulate the expanding shuck of an emerging caddis and if you have ever used this pattern, you’d have to agree that Gary nailed it.

Now, here’s where it gets sticky and is often open to debate. Can you substitute one material for the other?  The answer is both ‘yes’ and ‘no’.  We are not being evasive with this but are rather displaying the subjectivity of fly tying material.  Case in point is Gary’s sparkle pupa.  Due to the availability of Antron and the scarcity and cost of Z-lon, the former has taken over as the material most readily used in the the sparkle pupa.  It may not work quite as well and if you put the two patterns side by side, you can see the difference. However, it’s in the water that the Z-Lon really shines…literally.

So Antron will work, but Z-Lon works better for that intended purpose.  Are there other examples of this subjectivity?  Yes, in fact far too many to list.  The under lying message being, if an original recipe calls for one material it is likely that there will be one or two substitutes that will do in a pinch back at the camp.  The ingredients listed by the creator are more often than not used for a specific reason. 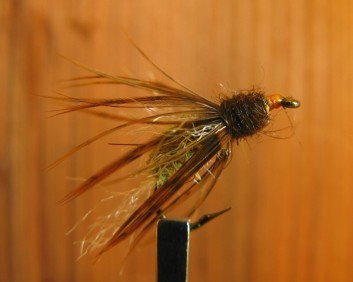 This Don Bastian pupa is fairly specific in terms of material as the combination makes the pattern very natural underwater.

This is one of the reasons that flies are virtually non-patentable as all one has to do is substitute material at one or more stages and viola!  You have a new pattern.

If you feel that a substitute material will work, ask yourself this; “Will the sub make the fly look and act like it was intended?”  Often times you may have to fish it first but if you are not getting the desired results, you may have to go back and use what was prescribed by the originator.