THE CAST AND STEP

This is probably the easiest and yet most effective way to cover water.  Although it is most effectual while swinging flies for steelhead or salmon, it’s also a great way to cover vast stretches of river for trout or smallmouth bass with streamers.

For salmon or steelhead, you need only to establish a starting point at the top (up stream) end of the run.  Identifying the most productive looking water and eliminating the least will help when you are unfamiliar with a run and make your time more productive.  So starting with a short cast, begin working the water directly in front of you.  My standard rule is to make the cast to a 90 to 45 degree angle across or downstream and allow the fly to swing to a stop below you.  It is worth mentioning that depending on the water temperature you may wish to speed up or slow the swing down.  It may take some experimenting with mending either up or down stream to get it right but it will come with some work.  Also, if you’re using a sinking tip, you may have to fool around a little with mending to establish the correct depth.  Keep in mind, the colder the water, the less inclined the fish are to move far to pick up a fly.

The steps that follow are simple; after each cast, extend the length of the line by one foot and repeat the process.  Continue to extend each cast until you have reached a comfortable and more importantly, manageable length of line, or on a small river, it may mean that you have reached the far bank.  That length will depend on the individual’s ability but the key is to stay within your means.  If the length of line is too great, it may compromise the presentation and be far less effective.

After you have established this length of line, it is important to maintain that length and I will tell you why in a moment, but for now let’s look at the next step.  Depending on how quickly you want to work a given piece will determine how many casts you make from each position. Typically, any more than two is redundant as the idea is to show your fly to as many fish as possible and eliminate those that aren’t taking.  From here, it is simply a matter of moving one step down stream after every other cast.  I typically cast, mend and then step if I’m familiar with the terrain but if not, it may pay to get your footing before making the next cast. 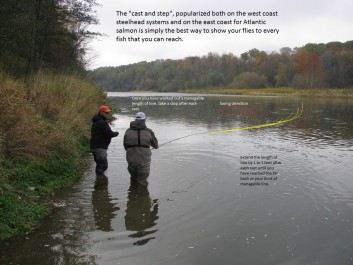 Scott Hall and Rick Whorewood work a beat on the Saugeen River.

As I mentioned just above, it is important to maintain the length of line as it may play a role if you raise a fish that doesn’t take.  Atlantic salmon are notorious for rising to a fly but not taking it and steelhead will often pluck or nip at one without actually biting it.  There is no reason to think that either is doing it for any other reason than a display of curiosity or aggression; the challenge is getting them to commit on the follow up casts.  If I raise a fish, my next thought is to show the fish the same fly from a slightly different aspect so I will shorten my cast by a foot for the follow up.  If the fish doesn’t take after that, my next cast will be lengthened by two feet and the fly will be shown to the fish from yet a different perspective to the original cast that he rose to.  If I still have no satisfaction, than a change of fly may make the difference.  The point though is to keep a constant and that should be the line length.  (It is not a bad idea to mark your fly line at 10 foot intervals starting at 30”.  Magic marker works well and it takes the guess work out of the equation.)

If I can’t get that fish to commit it’s worth taking a look around.  Anadromous fish take up a position in a run for a reason and it is usually because that particular spot provides a current position where they can hold without working too hard.  By taking shore line references and knowing your exact length of line, odds are good that that fish will be there on your next pass and may warrant a bit more diligence.  Unless I raise a fish, I won’t generally change flies in the middle of a run as I reserve that for the next pass and if I’m sharing the run with other anglers, it pays to have an idea of what each is fishing and change to something different for your next turn.

At first, this may sound somewhat fussy but if you break this down, it is tough to find a more effective method with which to methodically cover a run and to reiterate the end of part I, the more you practice it, the more automatic it will become.