The name suggests something evil and sinister and I’m sure that the people responsible for the common name had that in mind. They are big, ugly and just plain mean looking but the fish love them and anyone that doesn’t have at least a couple of these patterns in their tackle box or fly assortment can be missing out. The hellgrammite is the juvenile or nymphal name for the Dobson fly which are similar to stoneflies only typically larger and meaner. If you have ever seen the adult, there is no mistaking them as they are an extraordinarily large fly by North American standards. 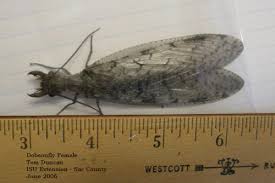 A good bet to find a sample, if you dare, is to go to any well lighted area near a river after dark during July or early August as like most insects, they will orient to high lighting.

I’ve fished these flies from Alberta to Argentina, all over the Great Lakes and in eastern Canada and have caught multiple species with just a couple of patterns. 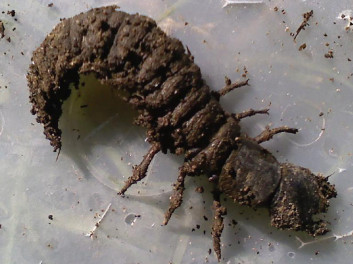 Hellgrammites are widely distributed throughout north and south America and have about 200 different species to the name. They range in size from about an inch long to five inches and vary in colour from black to yellow.

Once while fishing a spring creek in Patagonia I was needing a change from hooking rainbows with Chernobyl ants on every inside bend, (I know, I know…) so I decided to try one of my favorite little hellgrammites. I found about a half a dozen rainbows milling around a still pool and cast the hellgrammite into the centre of it.  I’m not exaggerating when I write this but it was like throwing a steak to an underfed pack of beagles. The trout actually raced after the fly and attacked it and when they missed the fly as a result of being too slow, they circled frantically looking for it. I was having so much fun with this fly that I was behooved to chase down my guide and show him how the fish reacted to it. The two of us stood on the bank of this little creek giggling like school kids watching the trout hunt down this fly.

Hellgrammites are like candy to fresh water fish from sheephead to steelhead and they are easy to tie and fish. A simple wooly bugger with a bit of shot bounced along the bottom, stripped or fished under an indicator will suffice but of course like any fly, there are literally dozens of patterns available. 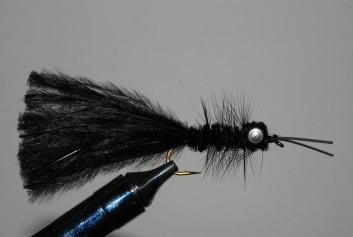 Murray’s Hellgrammite, a simple yet deadly pattern to match these large insects.

My personal favorite is one that was introduced to me several years ago and has become a staple in just about every fly box that I own. Murray’s Hellgrammite appears at first to be a direct knock off of a woolly bugger but there was a good amount of thought that went into its construction. http://catalog.murraysflyshop.com/products/murrays-hellgrammite-heavy-lead-eye Mr. Murrays original pattern is the one to go with as it is very simple to dress but very effective. Other patterns become very involved and require more time than is necessary and I try to keep it simple with every pattern I tie. If it ain’t broke, don’t fix it, right?

Grand River Outfitting & Fly Shop can help with any fly tying needs. Visit our website for details on up coming tying events.