Hardy has been a manufacturer of quality fishing rods and reels for well over a century and although the company has gone through its share of challenges, decade after decade, they continue to innovate and compete in the category.  Innovation and improvement is a good thing but change for the sake of change can become redundant and although Hardy has made some beautiful contemporary products, it is the re-introduction of several of their old work horses that have made some of the biggest splashes on our rivers over the last 10 years

That brings us to the “Lightweights”.  Trout reels with style that have been around longer than many of us but still continue to make sense.  If you look at the line up of Lightweights, they are quite frankly, simple elegance. 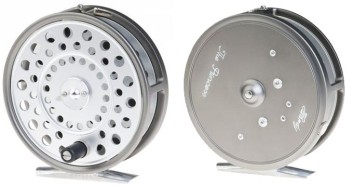 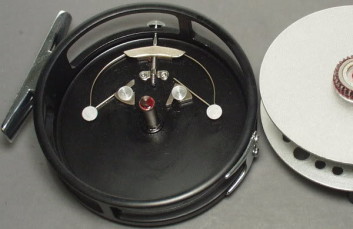 The working end of a Princess.

Simple in that they have only seven working parts and elegant in that they reflect the early days when fly fishing didn’t care about numbers or fancy gear.  There are few things in fly fishing like the unmistakable sound of a Hardy click and pawl reel be it screeching under the weight of a fish or just stowing line at the end of the day, these old reels take us back.

Not that they needed to, but the new Lightweights have seen some improvements.  Mainly at the machining end where the tolerances have been fine tuned just enough so that if you were to take one in excellent condition from say the 60’s and put it beside one that is manufactured today, the difference is there.  This improvement is most evident in the drag tensioner as there is a noticeable difference from when it is fully backed off to full drag.  Not that this is a big issue in a trout reel but from a finesse angle where the need to protect very light tippets is concerned, the latest model is just a step up from the earlier generation reels.

The classic Hardy reels like the Perfect, Princess, Marquis and Duchess have made a come back for good reason.  They  have always been and remain outstanding tools of the trade.  In fact, these reels are so durable that it begs the question, “Why did they ever leave us?”  Well, that’s one you will have to ask the folks at Hardy, but for now we have them available and Hardy needs to be commended on seeing the need for this re-introduction.  If you haven’t had the chance to appreciate one of these reels, we can put one in your hand.

Performance- The Lightweights are trout reels and as such, require little in the way of technology.  If you consider that one of these reels could conceivably last two lifetimes or more, they have to rate very high.  GROF rating 5
Craftsmanship- Don’t be put off by the fact that these reel are being produced in Korea.  There are a lot people in the industry that feel that the controls at the machining end are actually superior to what is being done in the U.S. or the U.K.  These reels are both beautiful and functional.  GROF rating 5
Value- We love these reels but at the $300.00 plus price point, feel that they may scare some customers in light of the fact that there are a number or more high reels available.  As a long time Hardy user, I personally feel they are worth every penny and it’s hard to put a value on something that will likely out live its owner. GROF rating 4.5
Over all rating. 4.83