I had a conversation recently with a gentleman that walked into our shop looking for guns and ammo.  After I explained to him that we didn’t deal in that category, the conversation shifted to fishing.  He indicated that he has lived in the area for the better part of 20 years and lamented rather matter of factually that there was no fishing for him in the region.  I was astounded by this statement and felt behooved to enlighten this poor person on his lack of vision.  I dragged him over to the desk and began to show him some photo’s.  It took a moment and I’m not sure that at first he actually believed me, but in the end I had him see the light.  What was most compelling to me though was that although he had a fishing background, he had all but abandoned it years ago after moving from Sudbury to this area, as he truly believed one had to travel to find quality fishing in Ontario.

Perhaps the most endearing features of fly fishing in Southern Ontario (for that matter, fly fishing in Ontario) is that it’s tough to get bored of the “same ole’ same ole’”. 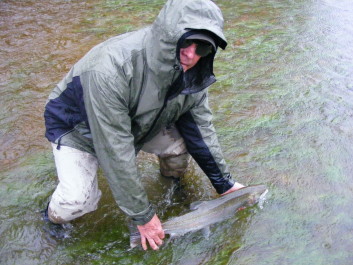 On any given day in July for instance, one could be fishing smallmouth bass on the Saugeen River or Maitland River, casting to rising trout on the Grand River or sight fishing for carp in Georgian Bay.  Ontario fly fishing guides have it pretty good here as well.  When you guide full time, you’re spending upwards of 150 days on the water and without the diversity, one could become rather complacent doing the same thing day after day.  I’ve always said that by the time I begin to get a little bored of one thing, I get to transition right into the next and it’s a whole new ball game with a renewed sense of focus.

From mid March in a typical year, we begin chasing steelhead and that can take us into late May.  For a period of about a month, it’s possible to be swinging flies with a two handed rod and then switch to a 4 weight in anticipation of a Hendrickson spinner fall in the evening.  Once the steelhead have shed, the focus becomes more on resident trout fishing and the opportunities here are endless. 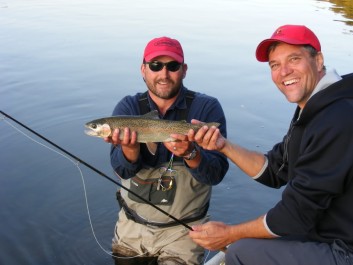 Without exaggeration, within a two hour drive of downtown Toronto, one could hit three very different trout streams that offer hatches from stoneflies to caddis.  By late June, bass season opens and again, the possibilities of multiple species in one day is highly likely.  The Saugeen River gives anglers a solid chance at rainbows, browns, pike and smallmouth all in the same day if you are willing to move around.  Although the trout season can slow down in August, bass, pike and muskie will fill the gap nicely and our local region (Wellington County and its reaches) have numerous lakes that are canoeable and offer a terrific opportunity to get out for a couple of hours in the evenings when the wind goes down, to spend with your spouse or children. 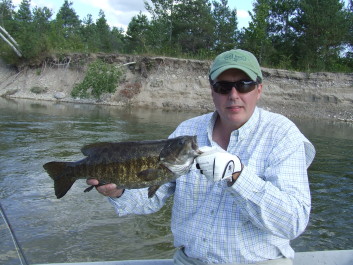 By September, we are starting to gear up again for the early steelhead and taking in the final weeks of the inland trout season.  Most of our rivers have fishable numbers of steelhead by mid October and the weather generally remains favorable through that period. 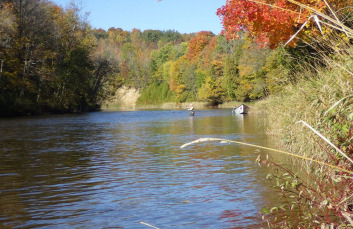 It’s easy to take for granted what you have in your backyard when you see it every day so it’s important to occasionally sit back and take a look from a different perspective.  Pound for pound, it’s difficult to beat what we have in terms of diversity for the fly fisherman within two hours of the largest population in Canada, but I’m still astounded at how few actually take advantage of it.