Yesterday, I had a gentleman tell me very seriously that fishing with a strike indicator and an yarn egg was nothing short of heresy.  Rather than engage in an argument that I wouldn’t win, I agreed to some degree and went along saying, “Ya, It ain’t pretty but it works.”

Why do some anglers detest the egg and indicator?  If you think about it and get past the idea that it’s easy to dislike the single egg because it’s so damn easy to tie, it really is a silly argument.  I’ve always argued that during some periods, eggs are found in nature as abundantly as stone flies, Mayflies and caddis and they are as integral a part of a fish’s diet as aquatic insects.  Is there a difference between a single egg tied with steelhead yarn and say a Skykomish Sunrise or a Babine Special.  Sure there is; those flies have really cool names and material to emulate milt hanging off of egg part of the fly. 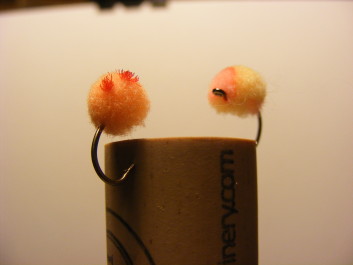 I’ve been fishing single eggs under indicators for a long time with great success.  Do I prefer to use more traditional presentations? Yes I do but I also recognise when one needs to adapt.  Single eggs under an indicator flat out catch steelhead when presented properly and make no mistake; it’s not like using a bobber.  In fact, it is as technical as fly fishing gets and requires more attention to detail than most presentations to perform correctly.  I say fish the way you want to fish and the next time someone give you hell about using eggs and indicators.  Just say, “Ya, it ain’t pretty, but it works.”