Yesterday, while steelhead fishing with my friend Jason King, we got into the old conversation about killing steelhead.  Now anyone that knows me will tell you that I’ve never been a preacher when it comes to catch and release and recognize fully that it was originally put in place as a management tool.  In most cases it has proven to be successful and the practice of catch and release has without question caught on and continues to gain momentum.  However, where Great Lakes steelhead are concerned, there seems to be a massive gap between the C & R advocates and those that do kill fish regularly and it makes many of us wonder why. 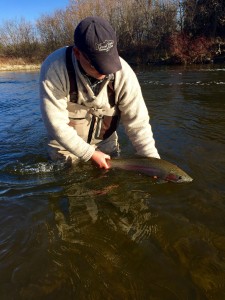 Putting them back makes you feel a lot better than whacking them.

Our conversation started with Jay relaying a bit of a story to me that happened to him just a couple of days before while fishing the Maitland River. He explained that he walked onto a pool where one other angler was drifting roe.  Jay went in above him as protocol dictates and began working his way through the run.  He soon there after hooked a fish which took him down stream of the first angler and after landing and releasing his fish, he began his walk back to the top of the run.  This took him past the other angler who was leaned over and cleaning a fresh steelhead.

“You got a nice one there!  I hooked this one just as you walked by me.”  he said to Jay in acknowledgment of his success.  “But man it’s been slow this year, eh’?”  He went on.  “Don’t know where all the fish are.”  He concluded, while wiping the blood off his hands.  Jay nodded a cursory nod and carried on.

“Don’t know where all the fish are.”  This is going through his head as he was killing another steelhead.  Ironic?

I’ve never been one to suggest that angler pressure is the biggest factor in declines of anadromous (potamodromous in the Great Lakes case) and believe strongly that environmental conditions affect recruitment considerably more but no matter our beliefs or theories, a dead fish is a dead fish and will add nothing to the future.  Larger systems obviousy have an edge as they are more difficult to find fish, more difficult to fish effectively and typically have stronger runs but are not beyond heavy harvest when the conditions are right.  I recall a day on the lower Saugeen River several years ago when the fishing was… well, it was epic!  From the mid 2000’s until 2012 the returns on the Saugeen were, depending on who you talked to in the area of 17000 to 20000 fish strong. (One report actually put that number at 45000 which, in this anglers eyes was an absolutely ridiculous and irresponsible number to publish.) I digress and where was I?… Oh yeah,  it was epic!  I mean everyone was catching fish.  You would talk to guys that would throw around numbers like 30 fish hooked, over a hundred in three days… etc, etc, and after actually experiencing it, I will confirm to you that it happened that way.  However, the side effect was horrifying as fish after fish after fish was unceremoniously put on stringers and/or bonked on the head.  One day in particular, I was guiding a couple of gentleman from New York and despite them having landed over a dozen fish of their own, the experience I later learned, was less than spectacular due to the shear carnage witnessed on that day.  One of my guests, to his disgust, estimated that over 300 fish were killed in ONE day over ONE kilometer of river!  No matter how one justifies it, that is wrong!  There are too many reasons to site in this article, suffice to say that enlightened float fisherman and fly fisher alike know darn well that it’s wrong and that this archaic way of thinking has to change be it through legislation or breeding out the old philosophies and starting anew.  Unfortunately, in the case of Great Lakes steelhead anglers, history truly does repeat itself.

So at the risk of hurting myself as I step down from this soap box, I’m going to give you my most compelling, albeit trivial reason:  Great Lakes steelhead are not worth eating.  In the end, what other reason is there for killing these magnificent creatures?  When I first started fishing for steelhead in the early 90’s, I killed my fair share and no matter what time of year I took one home, early in the fall and fresh from the lake or later in the season when they may have spent several weeks in the river, I have yet to find a recipe that makes them even passable table fare.  I kept justifying it as my right and I would never exceed the legal limit but if the truth be known, the only reason that I killed fish was to boost my ego.  To walk up the bank holding a steelhead by the gills suggested to others that I had it going on and knew how to get the job done.  Shame on me as more often than not and despite my best efforts to turn these into a meal, I could not.

Now I know that very few anglers that read this kill fish on a regular basis and that it will likely do nothing, but if you are someone that does, I challenge you to show me a recipe that will ‘wow’ me.    I’ll even buy the beer for the dinner party but I know it won’t happen.  If you are one of these anglers, think about this the next time that you ask yourself, “I can’t figure out where all the fish are.”