I was a trout snob. That’s right. In fact, I regarded just about any other fish that I caught outside of the trout and salmon realm as incidental inconveniences that were merely wasting my time. That was until about 15 years ago when I discovered smallmouth bass fishing along the rivers in southern Ontario. After the first couple of seasons of catching legitimate trophies in big, brawling rivers via streamers, I was hooked. However, I truly saw the light when I further discovered that you can catch these gems on the surface! It’s one of the most invigorating things you can do without spending a ton of money or as one of my friends says, “It’s the most fun you can have with your pants on.” I don’t know about that but I’ve been asked on occasion what I consider the “perfect” game fish and without hesitation I will answer, “Smallmouth bass.” 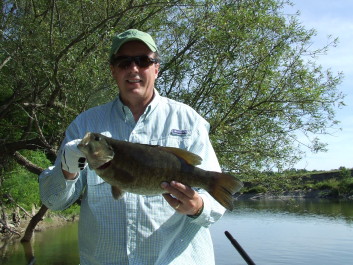 The Saugeen River is a trophy producer!

Why? You can often (though not always) catch few of them in a day, they fight like hell, jump like crazy, come to the surface to take flies, they’re generally fished during the warm weather months and you don’t require a ton of gear to be successful. That’s not to say that I would rather angle for smallmouth bass than steelhead or Atlantic salmon but if you weigh the criteria, and consider that we have one of the best smallmouth bass fisheries in our back yard, they really are hard to beat.
Stay tuned for more…

Check out https://ontarioflyfishing.ca/resources/best-bets/ for a detailed list of your best bets for fly fishing in southern Ontario.